A Beginner's Guide to CSR

A Beginner's Guide to CSR 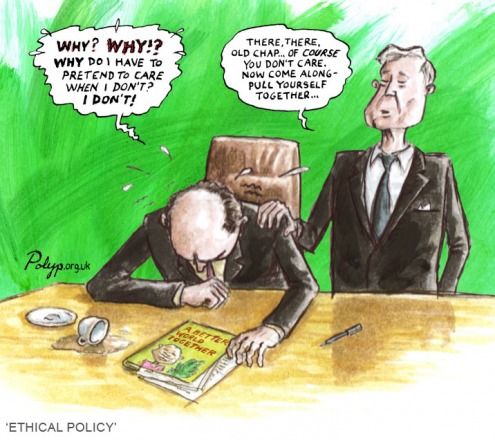 Mauritius is the first country in the world to require businesses to donate a portion of their profits to NGOs or government projects in the name of Corporate Social Responsibility (CSR). So what is behind this innovative legislation and what might be its consequences? To answer these questions, let us lay aside our preconceived ideas about CSR and explore the concept from first principles by comparing good businesses with good people.

To start, let us consider the characteristics of a “good corporate citizen” which is the organisational equivalent of a good individual citizen. For our present purposes, “corporate” describes a business that aims to make a profit for its shareholders, hence this excludes, charities, foundations, NGOs and social enterprises. If we imagine a spectrum of corporate citizenship that ranges from bad to good, we can identify four main classes.

Businesses in this class are like people who take short-cuts to satisfy their ambitions, ignoring the consequences on the world around them. These companies are out to make a quick profit; minimising their expenses by remorselessly exploiting natural resources and people. In the pursuit of profit, they cut corners, preferring to pay fines when it is cheaper than complying with legislation. To gain favour and advantage, they engage in corruption, offering bribes and kickbacks. They practise tax evasion, either by deceitful accounting or by registering themselves in opaque and unregulated tax havens.

Businesses in this class are like people who live according to the lowest acceptable standards of society. They meet their legal obligations of minimum wages, environmental protection and health and safety, but rarely go beyond them. They can be self-regulating but only out of fear of losing operating licences rather good-heartedness. However, where there are no laws, they ignore the external costs of their operations, both environmental and social, in the pursuit of profit. They pay taxes begrudgingly, utilising technically legal, but ethically irresponsible, "creative accountancy" and "tax planning" to avoid paying taxes whenever possible.

Businesses in this class are like patriotic citizens, in a country for life, rather than expatriates and economic migrants who only enjoy the benefits while the going is good. They develop long term strategies and make long term investments in the regions where they operate. For them, their way of doing business is as important as the results. Because of their ethics and morality they regulate themselves, going beyond minimum legal requirements to protect the environment and benefit their employees. When it comes to paying taxes, they responsibly apportion their payments with regard to the public services they utilise in the locations where they operate.

Businesses in this class are like the individuals who do volunteering after a hard day's work or give away part of their salary to those in need. They voluntarily employ their capabilities within the community in order to eliminate social ills and environmental degradation, even though they did not cause them. This can include part of their profits, the goods they produce, the assets they own or the time of their staff. Businesses donating to charity, which actually reduces the financial returns to their shareholders, is called corporate philanthropy. These companies not only pay their taxes happily, they also partner with government to ensure that they are spent efficiently and effectively.

Having explored the spectrum of corporate citizenship, the question arises as to why businesses evolve from being bad to good citizens. The answer lies in the sophistication of the society within which they operate, in a word: people. People choose where they want to work, people choose in which companies they want to invest and they choose from which companies they wish to buy products and services. Therefore, the degree of good corporate citizenship found in a country's businesses is a reflection of the goodness found in its citizens.

Clearly citizens cannot make choices if they do not have sufficient information. Therefore, more sophisticated societies require businesses to account for the full spectrum of their activities. They make financial, social and environmental (known as triple bottom-line) reporting mandatory. In addition, voluntary donations from both citizens and corporations can be encouraged by making them tax deductible, effectively generating more income for the beneficiaries since no tax is charged on the gifts.

There is another class of business that stands outside the evolutionary spectrum. They can be compared to people who give some service to society, but only for the sake of appearances. These companies are fundamentally not good corporate citizens, but with a few apparently philanthropic actions and a clever marketing strategy, they can create the impression of being much better than they are. Occasionally these charlatans are exposed by investigative journalists, however, a much better approach is to force them to disclose all their activities to the public through triple bottom-line reporting.

So let us reflect on Mauritius. Triple bottom-line reporting is not mandatory, making it hard to tell the difference between good and bad corporate citizens. However, society is not asking for such information, reflecting its relatively low level of sophistication. There are many examples of companies giving bribes or kick backs to authorities and accepting fines for breaking laws. However, there are few examples of citizens shunning businesses because of their social or environmental records.

Given the relatively low level of sophistication of Mauritian society in terms of demanding good corporate citizenship, where does the Government stand? It is a somewhat disappointing picture. For a start, the country's ultra-low tax regime for global businesses is based on tax avoidance, providing opportunities for treaty shopping and even tax evasion, facilitating bad corporate citizenship by international players. Second, although it has introduced very good laws protecting workers and the environment, it has a very poor record in enforcing them and an even poorer one in dealing with cases of alleged corruption. Fourth, the Government itself lacks transparency and accountability, so it is hardly surprising that it does not require the same from local businesses. Finally, to hammer the nail in the coffin, charitable donations are no longer tax deductible, discouraging philanthropy by businesses and individuals.

Apparently recognising the poor level of corporate citizenship in Mauritius, in 2009, the Ministry of Finance introduced the CSR Fund. This is little more than an additional corporation tax which companies have the choice to pay directly to approved NGOs rather than government coffers. Imagine trying to make selfish people into better citizens by forcing to give away part of their salaries! It is more likely to create resentment.

The key to the insanity of this policy is that it ignores that fundamental observation that the evolution to good corporate citizenship, as with the individual, must be voluntary. In addition, rather than encouraging less responsible businesses to move along the spectrum towards better citizenship, it tries to make them leapfrog the intervening stages straight to the final one that we have called compassionate but is more commonly known as corporate philanthropy. Philanthropy literally means “for the love of people” and even the most foolish among us know that it is impossible to legislate love.

Assuming that the minds behind the policy are not as stupid as our analysis would so far seem to suggest, we ask: why would they introduce it? Let us return again to first principles. One of the reasons that governments exist is to correct for market failures. Businesses must be regulated to curb their monopolistic tendencies and public services must be provided when markets fail to supply them. Of course, NGOs exist to call governments to account and to make up for their failure to provide sufficiently comprehensive public services, i.e. to plug the gaps.

Reading the reports of the National Audit Office, it is clear that the Minister of Finance is struggling to balance the books. Despite the enormous budget support grants from the EU, he still has to beg China to bail him out. The genius of the policy of the CSR Fund now becomes apparent. The Minister is simultaneously introducing a stealth tax AND permitting public services (along with their costs) to be outsourced from the Government to civil society. (The precedent for this has already been set when, in 2006, the Ministry of Education closed down the programme to educate street children; the redundant staff set up an NGO to continue the work.) At the same time, because NGOs must be approved by the Ministry of Finance to receive the “CSR tax”, he is giving himself the power to curb their freedom of expression. Which NGO would risk losing their source of funding by daring to criticise the Ministry of Finance?

So it is clear. The policy of the Minister of Finance is unlikely to transform bad corporate citizens into good ones. Indeed, it will probably encourage more incongruence as companies seek to gain some return from their CSR tax by advertising that they are being "philanthropic". By outsourcing public services to NGOs there is a risk that not all of the population will benefit equitably. NGOs are far less publicly accountable than governments and can more easily favour one geographic region or ethno-religious community over others. More insidiously, the policy has the power to silence the voice of civil society. Such a political strategy has a name: Anglo-American neoliberalism, bordering on fascism.

A civil society that values the principles of environmental stewardship, social justice and freedom of expression, or simply out of common sense, must stand up and oppose such policies. The upcoming general election will reveal whether Mauritians are sufficiently sophisticated to recognise and reject them. Who will sound the rallying cry?